On April 16, 2016 a 7.8 magnitude earthquake struck Ecuador, killing 659 people and injuring over 16,600.1 As the nation begins its emergency response, the disaster sheds light on the weaknesses of its health infrastructure. Natural disasters can be characterized as a health issue because in addition to causing physical injuries, they also destroy urban, rural, and societal infrastructure. Major roads, hospitals, and government buildings are damaged, and the devastation caused moves beyond what is typical to other health risks. By looking at global earthquake reactions, it can be demonstrated that Ecuador will need to strengthen its health training, rebuild its infrastructure, and take a human rights approach to health care. To be at par with other nations’ disaster responses, Ecuador should not limit its relief efforts to physical treatment and must incorporate mental health services.

In just the short span of 1970 to 1979, natural disasters affected 19.4 million people.2 “The WHO estimated that between 1964 and 1983, natural disasters throughout the world killed nearly 2.5 million people, and left an additional 750 million people injured, homeless or otherwise harmed.”3 Systems governing natural disaster response should transcend national borders the same way the effects of these disasters extend beyond boundaries.” Disasters cannot and should not be viewed as regional issues to be handled by local authorities; nations must work together to provide effective aid. One of the best ways to effectively channel aid is to look at examples of other countries that have experienced similar challenges. Michel Lechat reflected on these shared experiences explaining, “there are many features common to all, or most, disasters. Better dissemination of the relevant knowledge may help in prevention, preparedness, relief, and rehabilitation.”2

While the recent earthquake in Ecuador has created a vast array of new challenges, there were preexisting problems that challenged the nation’s health system. Ecuador’s health services are “fragmented, [with] a shortage of human resources, inadequate distribution of benefits and insufficient coverage.”4 There is sharp disparity between the health of urban populations and that of the more rural indigenous groups. Chronic malnutrition levels are around 19.2% in urban areas, and 35.5% in rural areas.4 Ecuador has the fourth highest number of tuberculosis cases in the Americas, and HIV/ AIDS levels are on the rise. Ecuador is one of the few Latin American nations to explicitly guarantee sexual and reproductive health rights in its constitution, but these rights were far from being realized, even before the earthquake struck.4 These societal issues will increase the obstacles Ecuador faces as it begins to rebuild.

In order for relief to be effective, it must be implemented on a local level that the nation can maintain over time in its effort to rebuild, Ecuador should fully understand the needs of its local population and offer services that correspond to these societal needs. For instance, since 95% of Ecuador’s citizens identify as Catholic, faith-based charities and the establishment of religious services will be important to the identity of survivors.5 Ecuador has over forty indigenous groups each of which maintains culturally unique distinctions.5 One study demonstrating the different localized responses to disaster looked at three types of aid: emotional, informational, and tangible, which included money, food, and shelter. They found that Latin American individuals tended to rely more on family and kinship networks and less on non-familial networks such as government agencies, social, professional, and mental health services, and charitable and support organizations.6 This indicates that effective aid will need to utilize existing community bonds to reach all facets of the population. Disaster relief efforts are necessary, but need to be tailored to best address local concerns. There is fear that overwhelming local authorities with disaster response can create dependency, and remove the ability for reconstruction lead by locals. However, this is often not the case when relief efforts incorporate local officials and leaders and utilize community mobilization.

Destruction on the Ecuadorian Coast near Coquimbo. Source: Wikimedia

Mental health services are one of the most pressing needs after natural disasters, and this essential issue is often overlooked. “A hidden epidemic of mental and behavioral health threats will linger among affected populations for years… invisible, unspoken, and unacknowledged in many cultures, [these] problems are pervasive during and after major emergencies. The essential need to address mental health issues can be eclipsed by the understandably more urgent and immediate needs of victims. In addition to merely securing housing, medical attention, and food, aid groups need to view mental health as a primary human health right. It is estimated that after disasters, 70-75% of victims will present transitory symptoms of anxiety and depression, and these numbers can rise based on the severity of the situation.7

Ecuador’s response to the 1987 earthquake, that hit the northern part of the country, is a historic example of how the nation deals with mental health needs after natural disasters. A study carried out shortly after the quake examined the effects of the quake on 150 adult patients at a primary care clinic and found that the prevalence of emotional disorders was as high as 38%, with anxiety being the most common.7 In response to these findings, Ecuadorian officials worked with the primary care workers treating the victims of the quake to strengthen their understanding of mental health issues that accompanied disaster. It is important to note that the earthquake involved in this study resulted in a great deal of material damage and physical injuries, but there were no reported fatalities. It has been shown that “the frequency of emotional disorders among the victims of a disaster is proportional to the magnitude of the catastrophic event,” which means that the most recent earthquake will probably lead to an even greater spike in mental illness.7 Survivors of disasters are often consumed by immediate needs to the point where they do not recognize their own psychological burdens. Demonstrating this, a study that examined the surviving population of Turkey’s 1999 earthquake found that only 6.7% of the sample indicated that they needed psychological or emotional support.6 Despite this hesitation, the links between disaster and mental illness are clear. After an earthquake in Gujarat in 2001, a “study by Oxfam India in Anjar, 30 miles east of the quake’s epicenter in Bhuj, indicated that 100% of the school students and 75% of teachers reported a psychological problem.”8 These statistics reveal that the mental health effects of disasters are not limited to victims – the same awareness and care needs to be extended to medical staff as well. A study carried out after an earthquake in Kobe, Japan showed that over one-fourth of the nursing staff experienced sleep disturbance, anxiety, social dysfunction, and/or severe depression.9 These results indicate that mental health issues are rampant among disaster-affected populations, and should be incorporated into relief efforts. 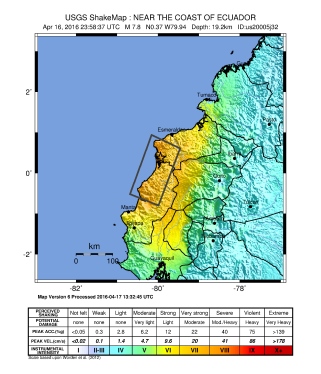 Due to the unpredictable nature of earthquakes, it is essential that Ecuador begin to adjust its infrastructure preemptively as it rebuilds. Recommendations often urge countries in high-risk regions to implement strict building codes and protect their rapidly urbanizing communities. Hospital structures, which are particularly detrimental to lose, require special emphasis. “On August 5 th , 2007 in just two minutes the city of Pisco in Peru lost 97% of its hospital beds to an earthquake… [and] in Pakistan in October 2005, an earthquake destroyed 50% of the healthcare facilities.”10 Without rebuilding in a way that is both effective and protective, it will be impossible for Ecuador to survive future disasters. Intelligent construction is essential to having urban areas able to withstand natural impacts.

Ecuador’s recent earthquake marks one of the most devastating moments in its history. The disaster has ripped preexisting health infrastructure failures into the spotlight, and highlighted extreme disparity and poverty. Hope remains, however, for a full and successful recovery. It is necessary for Ecuador to carry out rebuilding on a local scale and learn from earthquakes that have occurred both within and outside its national borders. In order for the country to best serve the needs of affected communities, mental health services should be integrated into other healthcare. Simply treating physical injuries should not be enough. “Since a human being is by nature a biopsychosocial organism, the effects of disasters must be evaluated on those three levels (bio-psycho- social) as the framework for providing the victims the health care necessary for the prevention, detection, and management of physical, psychological, and social sequelae.”7 If effective aid strategies are utilized, structural regulations are increased, and mental health issues arising from the earthquake are addressed, Ecuador should be able to make a recovery that will improve its ability to respond to potential future disasters.

Carlin is a pre-med History of Science, Medicine, and Public Health Major in Trumbull College, ’18. She can be contacted at carlin.sheridan@yale.edu