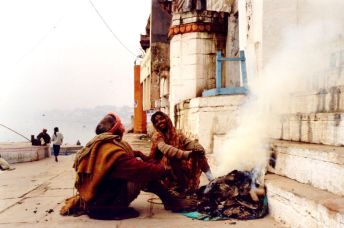 How do vulnerable communities come to reckon with the unthinkable? The question of how best to respond to communal atrocities in the wake of violence has occupied much scholarly discourse in response to recent outbreaks of violent conflict. In particular, a recent trend toward collective acknowledgement and verbal elaboration of trauma, an intervention technique designed as a cathartic release of the damage wrought by such violence, has emerged in both humanitarian and academic spheres. This trend contrasts strongly with historical precedent set by instances of collective amnesia—intentional silence surrounding shared trauma and community violence—providing ample space for comparison and analysis of the causal mechanisms behind resilience-based healing.

Sexual violence is a frequently used tool in violent conflict, employed to inflict physical and emotional trauma on vulnerable populations. Communal reckoning with shared histories of sexual violence in community-led interventions is a critical mechanism undergirding resilience-based approaches to rape and other forms of sexual assault. For instance, feminist empowerment interventions against domestic violence in India illustrate the causative power of this collective reckoning both in the wake of violent conflict as well as in its absence. 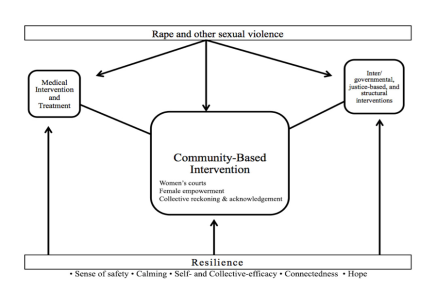 Community-led interventions are central in responding to cases of conflict-related rape and other forms of sexual violence—in contrast to other frequently applied techniques such as medical treatment and recourse to legal and other structural forms of justice. Specifically, this framework defines ‘community-based’ or ‘community-led’ intervention as any intervention that does not rely on official government or judicial mechanisms to ameliorate the effects of violence. The marked absence of effective governmental, judicial, or other punitive mechanisms for handling reported cases of sexual assault is one of the primary factors necessitating community-led approaches in settings of conflict; therefore, community-based interventions take precedence over other modes of intervention in this conceptual model.

One of the key components of this framework, moreover, is its emphasis on resilience, which underlay all three identified classes of intervention to varying degrees. Stevan Hobfoll, the author of “Five Essential Elements of Immediate and Mid-Term Mass Trauma Intervention: Empirical Evidence,” identifies five essential elements that effective resilience-based trauma interventions promote: a sense of safety, calming, a sense of self- and collective-efficacy, connectedness, and hope. These qualifiers are useful additions to a framework within which specific interventions can be systematically analyzed, because they offer concrete metrics against which a given intervention can be designated as “resilience-building.”1

Traditionally, women in India have faced significant levels of socially sanctioned domestic violence within the household. In addition to rape, moreover, impoverished Indian women have been faced with societally imposed marital restrictions in relation to the dowry system—depriving them of agency in their choice of marital partner. The burden of domestic violence—both physical and sexual—falls disproportionately on women living in low-income households in urban slum settings.2 In response to these grievances, Indian women have developed all-women courts, known as mahila panchayats, to empower and offer legal protection to women at risk for domestic violence  and abuse. Action India, a Delhi-based NGO, has been instrumental in ensuring the successful creation of mahila panchayats as well as the execution of their punitive recommendations.

Significantly, the need for mahila panchayats in India grew out of a perceived failure of existing legal and judicial mechanisms to provide women with adequate redress of their domestic violence-related grievances. One Indian woman described her experience with the mahila panchayat system as such:

The mahila panchayats are modeled after traditional community-led court hearings called biradari panchayats, which Action India has identified as fraught with caste-based corruption and patriarchal influence—a key instrument of suppressing slum-dwelling Indian women’s legitimate grievances against their husbands.3 As traditional biradari panchayats have a “long history and prominent place in the lives of slumdwellers,” the all-woman makeshift courts provide a recognizable context within which to realize collective behavioral change.2 Most significantly, the mahila panchayats actively engage the accused perpetrator of domestic violence in the intervention process, facilitating mutually agreed upon action steps between spouses to engender meaningful and lasting peace within the household.

A panel discussion on violence against women held in Chandigarh, India part of a worldwide series of events marking the Global Summit to End Sexual Violence in Conflict in 2014. Source: British High Commission

Mahila panchayats came into existence in the absence of any Indian post-conflict scenarios. It may be noted tangentially, however, that although no significant experiences of interpersonal violence constitute the backdrop against which this iteration of women’s courts took shape, the structural violence that the women in question experience—given their low-income status in a country with sub-optimal standards of gender equality—is nonetheless tangible and immensely significant. Furthermore, recourse to mahila panchayats often entails reformative measures for the perpetrator of sexual violence. Thus, the case of extra-governmental adjudication of domestic violence cases in India provides a compelling argument emphasizing the effective power of collective reckoning in fostering resilience in fragile communities.

The formation of mahila panchayats for extra-governmental adjudication of domestic violence cases clearly employs resilience frameworks to collectively heal afflicted communities. In particular, its emphasis on creating courtroom structures filled entirely with women, many of whom have experienced similar incidents of domestic violence within their own homes, underscores the connectedness of women in a given residential community. Furthermore, the independent initiative by which mahila panchayats have been organized exclusively by women enhances the self- and collective-efficacy that Hobfoll identifies as central to resilience-based interventions. Finally, the lasting resolution of domestic violence that the mahila panchayats have successfully created in Indian households is conducive to restoring and promoting safety, calm, and hope for a brighter future.

The majority of this analysis of sexual violence intervention strategies has focused on active and public acknowledgement of shared traumas as a pathway to resilience. However, other intervention strategies have previously relied on conscious collective forgetting as a healing mechanism. Yet while ‘official amnesia’ has been embraced as a tool to reduce the possibility of recurring episodes of vindictive violence in certain post-conflict settings, such as in postwar Spain and Cambodia, younger generations of socially conscious youth have demanded public reckoning of past traumas, if for no other reason than “to ensure that there can never be a repetition” of such atrocities.4 Indeed, ‘official amnesia’ approaches to rationalizing conflict narratives eschew the principles of strong resilience-based interventions, precluding future generations from security in adopting a resolute ‘never again’ mentality toward incidents of violent conflict.

Community-led interventions alone are certainly prone to certain shortcomings in the scope of their effective power, and these limitations must be carefully considered when applying intervention strategies locally. Though collective acknowledgement of trauma has the capacity to provide the catharsis necessary for a resilience-based approach to healing from sexual violence, it nonetheless bears noting that “many can never recover from… terrible injuries and losses” associated with such violence.4 Therefore, while collective reckoning can be an impactful first step toward resilience building, it must not be conflated with the desired end result of augmenting the health of fractured communities. Rather, collective reckoning and bearing witness are crucial preliminary steps toward a much broader and more extensive communal healing process.

Similarly, it must also be acknowledged that community-led interventions are not the only mechanisms by which societies can apply a resilience-based approach to healing from rape and sexual violence. In fact, many effective resilience-based interventions in cases of sexual violence successfully incorporate both community-led and structural or policy-based components. Furthermore, provision of adequate and timely medical treatment for victims of rape in immediate conflict zones remains a key priority for humanitarian interventionists worldwide.

This analysis of successful iterations of women’s courts prompts an equally important discussion—though one with drastically fewer concrete answers—of the community apparatuses available to male survivors of sexual violence. Though sexual violence in conflict and non-conflict settings has occupied the policy agenda of many local and international advocacy organizations, the experiences of men and boys who have been subjected to sexual violence is markedly absent from the majority of such discourse.5 Indeed, within the framework of the aforementioned intervention case study, no spaces exist for male survivors of sexual violence to share their experiences—to take part in the collective reckoning with experienced atrocities. Future interventions will do well to more pointedly accommodate the particular needs and experiences of male survivors.

It is clear that collectively bearing witness to communally experienced trauma is a key pathway through which resilience can be fostered in fragile or vulnerable settings—especially as it relates to healing in the wake of sexual crimes. The distinct sense of connectedness and collective efficacy that these interventions create are essential in fostering resilience in the face of crisis, even if such resilience in itself is not able to fully ameliorate the physical and emotional trauma such violence can inflict on individuals. Most importantly, what these and other interventions share in common is a commitment to making visible the atrocities that are all too often kept hidden in conflict, post-conflict, and non-conflict settings alike.

The implications of the successes of community-led interventions are far-reaching and exceptionally fertile. Indeed, the act of bearing witness has effective applications that extend beyond the realm of sexual violence and community health. For example, “truth commissions” in post-conflict states such as Chile have been successfully employed as tools of collective reckoning with a shared past experience of wartime atrocities, with the goal of enumerating concrete action steps toward once again making communities, as well as entire nations, whole. More broadly, future interventions in conflict settings might make use of this resilience-based conceptual framework in order to mitigate experiences of trauma during immediate crises, rather than simply to promote communal healing after violence concludes. In any case, the act of collective reckoning—of bearing witness to the unspeakable—is an undeniably effective tool in tailoring pointed resilience-based interventions in post-trauma settings.

Aaron Berman is a senior in Saybrook College majoring in Global Affairs, is a Global Health Fellow, and is pursuing a Yale Masters in Public Health degree. He can be contacted at aaron.berman@yale.edu.