I did not know what public health development work meant when I left for Honduras in March; and I am not sure most of the people on my trip knew either. We were Global Public Health Brigade volunteers that would spend a week in the rural village of El Juté empowering communities to prevent common illnesses through in-home infrastructure development. Our understanding of this work was limited to our assigned projects: building latrines, ventilated stoves, and concrete floors. We did not understand that public health work was more than the result of a hammer, shovel, and some cement. We lacked the context to understand our projects in the greater scheme of improving the health of poor people in low-middle income countries. We did not see that this Brigade was just the beginning and not the end. 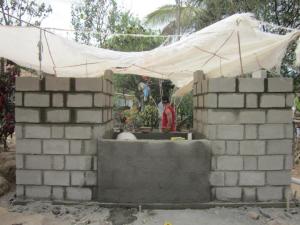 There are about 360 people and 70 homes in the village of El Juté, Honduras. A typical home has one bedroom, a room with a stove, cemented walls, dirt floors, and a pour-flush latrine in the back. There is no electricity, nor are there doors to separate the inside from the outside.

El Juté is tucked away in the mountains about three hours from Tegucigalpa—the capital of the country.[i] Many of the people from El Juté have never even been to the city. 90% don’t own cars and most public buses do not make it as far as El Juté; they cannot negotiate the 45-minute drive along winding dirt paths made for traveling by horse. It is no wonder the people do not leave often. Children attend one school building until 6th grade but are forced to make the difficult decision about whether to leave all they’ve ever known for high school in the city.

This profound level of exclusion from the rest of Honduras has shaped daily habits in El Juté. People live according to the sun—men wake up when it rises at 4 am and go to bed when it sets. They are agricultural subsistence farmers who work the land, look after cattle, chickens, and horses and grow their own crops for their families to eat each day. Women spend their time cooking in front of the stove and taking care of the children.

I noticed that many of the adult men were missing teeth. A Brigade staff member suspected that this was because they didn’t brush their teeth enough or didn’t have the resources to do so. Doctor visits are infrequent as the closest health center is two hours away by foot. If there is a surplus of crops, the men can sell the extra in a nearby town to make a profit.

Each project is associated with improved health status: building and lining properly functioning latrines enhances sanitation and the disposal of waste. Improved latrines feature a clean water basin for dish washing and hand washing with soap after defecation. Pouring concrete floors in the bedrooms and kitchen area contributes to infant health status and hygiene. The dirt floor is their playground. Before they can even walk, these children crawl, play with their toys on the ground, and immerse themselves in a sea of bacteria that finds its way into their mouths and bodies. The construction of the concrete floors provides a clean foundation for the home and reduces indoor pollution from the outside dirt. The improved stove has a chimney that funnels fumes from burning biomass fuels outside of the home and prevents women and children from inhaling indoor air pollution. Ventilation directly increases longevity because indoor pollution is linked to conjunctivitis, respiratory infections, cardiovascular disease and chronic obstructive pulmonary disease.

At the end of the day, the projects themselves are not the champions of health improvement. I have learned that it is more important to focus on maintaining health status with these developments—the role of proper hygiene. Without proper hygiene, the concrete floor, and latrine are rendered useless. The reason is this simple: If people don’t wash their hands after using the latrine, bacteria will spread as they touch food and interact with other people. Or, if people don’t clean the concrete floors, indoor pollution will eventually accumulate and lead to diseases that shorten life expectancy. It’s hard to imagine that seemingly small habits and changes in our households can impact our health. In fact, environmental health accounts for roughly 1/3 of the total burden of disease on a household, community wide and global scale.

Now we know that hygiene is at the heart of development work and health status.  We also know that the maintenance of hygiene is out of Brigaders’ control, as it depends on the health habits of the community. But what happens if the families cannot afford soap? What happens when crops fail and there is no surplus to generate income?

We are left with a central question of what comes next after Global Brigades has left. In other words, who is responsible for the maintenance of public health and hygiene in El Juté? Is it the community members themselves, the local, and national government? Or is it a combination of them all? As volunteers, our work is done at the end of the week when we have finished installation. The sustainable developments simply prevent the further spread of infectious diseases and bacteria but do not ensure permanent and adequate hygiene. This is dependent on economic opportunity and whether families can continuously afford amenities like soap. Therefore, health status cannot be understood in isolation. It is inherently tied to the economic opportunities of the families. If women can spend less time cooking on more efficient stoves, perhaps they can spend more time helping to produce surplus crops or pursuing educational opportunities. If men are healthier, they are less likely to suffer from disease and can spend more time working and providing for the family. The same goes for children who can then attend more school, perform higher, and either work for their families or go to high school and seek broader opportunities.

Increased profit and economic opportunity are steps in the right direction. But as long as community members are two hours away by foot from the nearest health center, they will continue to have a lower health than people in the city. Although the health centers are free, indirect costs, including a day’s worth of work and pay, are an incredible burden.

The role of the local and national governments is critical at this point. They are responsible for ensuring access to basic health services and initiating community health education programs, even in the poorest and most rural communities. But the governments’ commitment to rural people is shameful. Politicians visit the communities, promising aid and infrastructure during campaigns, and then default on their promises once they’ve been elected to office. The community people have grown tired of this political cycle, and have lost trust in the government. But with 58% of the national rural population living in extreme poverty[ii], the government needs to act. It is responsible for stocking medicines at local health centers and making sure that even the poor have a chance at receiving equitable treatment.

This is why it is difficult to measure the success of public health work because the job is never really done. Our Brigade work was just the starting platform for an upward trajectory that is dependent on government commitment, loyalty, and belief in health as a fundamental human right for all people.